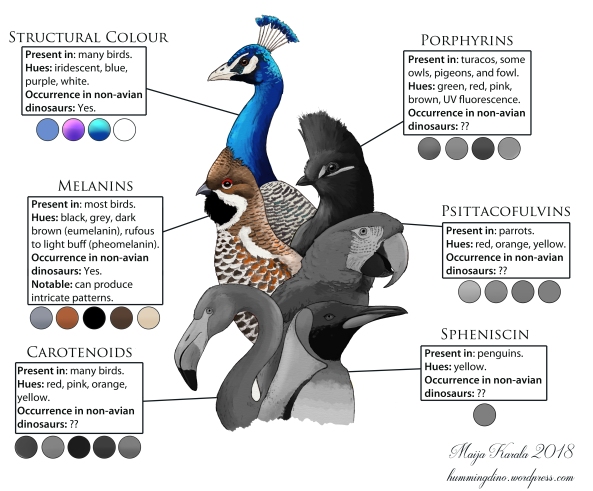 At the moment, only a small subset of colour-producing mechanisms present in birds can be detected from fossils. What is a paleoartist to do?

One of the most fascinating aspects of paleoart is the creation of colour palettes for animals long gone. It is an interesting exercise: the end product is almost certainly wrong, as chancing upon the exact right colouration is very much comparable to winning the lottery. The goal of most paleoart is to make reconstructions that are wrong in a way that is plausible, interesting, and aesthetically pleasing.

Even the recent advances in deciphering colours from fossils have not changed everything. At the moment they only apply to a small number of dinosaurian taxa, and even within those, to a small subset of colour-producing pigments.

There are lots of ways to approach the problem of colour. Some paleoartists copy and paste the patterns of living animals on top of ancient ones almost directly. Others study animal colouring and ecology and incorporate ideas and principles to their art. Still others are most concerned with making beautiful art pieces with colours that fit together.

Whichever the approach, everyone benefits from understanding the basics of animal colouring. Where do the colours of living animals come from? What do we know about which pigments and structures were possible for extinct groups? For non-avian dinosaurs, the best point of comparison are living birds, followed by crocodylians. Studying mammals also has something to offer.

Birds and crocodylians, like most vertebrates, are extensively colored with melanins. These pigments are housed in microscopic grain-like organelles called melanosomes which in turn are produced by specialized cells called melanophores. They are divided into two main types: black and brown eumelanins and reddish pheomelanins.

Ancestrally, melanophores were giant cells with the ability to change color. When melanosomes within these cells are gathered to one spot, the animal looks pale, and when they are spread out, the animal darkens. This mechanism is important for many squamates, amphibians, and fish, but it has been lost in birds and mammals. They have feathery or hairy integument covering them, rendering color-changing skin all but useless.

Among crocodylians, only true crocodiles (of the genus Crocodylus) and gharials have limited ability for color change (Merchant et al. 2018). In alligators, caimans, dwarf crocodiles, and slender-snouted crocodiles, the ability is missing. There is no evidence for other pigment cell types, like lipophores and iridophores, widespread in in other ectothermic vertebrates (Spearman & Riley 1969). These are also absent in birds and mammals.

This loss of pigment cells and their function suggests something odd has happened during crocodylian evolution. It might be that, like mammals and birds, they too had fuzzy, endothermic ancestors and lost much of their skin colour as a result. The physiology and genetics of crocodylians presents some indirect evidence that this might actually be the case. Alternatively, they might have gone through a nocturnal bottleneck similar to mammals, where colouration has simply not been very important to them. This idea is supported by the fact that crocodylian colour vision is also limited (Emerling 2017). 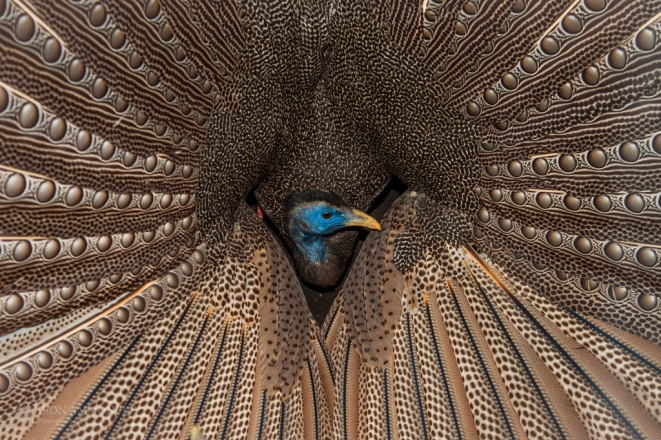 In birds, melanins can form incredibly detailed patterns, such as this display plumage of an Argus pheasant. Photo: Paul Williams / Flickr. CC 2.0 licence.

In birds, melanophore cells no longer keep the pigment they produce, but feed it into developing feathers, scales, and skin cells. In feathers, melanins can form intricate patterns, as seen in many galliform birds. Simple, hair-like feathers of non-avian dinosaurs could probably also be patterned, like the fur of many mammals and the spines or porcupines.

In an exceptionally well preserved specimen of Psittacosaurus, there is evidence of a similar way of colour production (Vinther et al. 2016). The specimen has extensive preserved pigment embedded within scales. It is hardly conclusive evidence, but does suggest that bird-like colour physiology was already present in ornithischian dinosaurs – perhaps because they descended from mostly feathery ancestors, if the protofeather-like structures in different dinosaurian and archoaurian lineages were actually of common origin. Simply put, this means Psittacosaurus probably did not change colour like a lizard.

Instead, the unfeathered parts of dinosaurs may have had a colour palette similar to the naked and scaly part of today’s birds.

Melanosome-based colours are known from Anchiornis (left) and Sinosauropteryx (right). These were painted before the publication of a possible bandit mask pattern on the face of Sinosauropteryx. Artwork: Ville Sinkkonen, used with permission.

Fossilized melanosomes that originally contained black or brown eumelanin (sausage-shaped) or rufous pheomelanin (the shape of slightly flattened meatballs) are also found in well-preserved fossil feathers. The shape and density of melanosomes, when viewed with an electron microscope, can be used to approximately gauge the original colouration of the animal. By blind-testing with feathers of living birds, the reliability of this method has been estimated to be about 82 % – far from certain, but much better than nothing.

Some examples of structural colours in living birds.

An important part of bird colouration is not created by pigments, but by the structural characteristics of feathers or skin. These microscopic details create the glossy black of ravens, the iridescent rainbows of hummingbirds, and the smooth blue of the blue tit, among others.

A specific arrangement of collagen fibers is what causes blue and green skin in birds (such as the Argus pheasant pictured above, cassowaries, and the velvet asity, Philepitta castanea) and mammals (mandrill faces). As collagen was certainly present in non-avian dinosaurs, this kind of skin colour would likely have occurred in them, too.

In feathers, iridescence happens when feather barbules have a microscopic double layer of melanosomes that breaks light into colours like a prism. Depending on the distance between layers, some colours are refracted back and others either absorbed into the skin or broken down via destructive interference. In some cases, different wavelengths (=colours) of light are refracted in different angles, causing the animal to change colour depending on which direction it is viewed like a puddle of oil. For example, shine of black feathers on the Eurasian magpie (Pica pica) can look green, blue, or purple from different angles. The magpies see themselves also shining in ultraviolet, which is invisible to humans.

Another way structural colours are born is through minute air bubbles between the outer keratinous layer of the feather and the melanosome layer underneath. This spongy layer causes blue light to refract, but lets other wavelenghts to be absorbed to the black melanin below. Most non-metallic blues, such as those in blue tits and blue jays, are created this way.

Iridescent structural colours have been described from some non-avian dinosaurs, such as Microraptor (Li et al. 2012) and Caihong (Hu et al. 2018). In Microraptor, the preserved black melanosomes are arranced in sheets similar to living glossy black birds, like ravens. However, the thickness of the keratin layer is unknown, which makes it impossible to pinpoint the exact colour of the metallic sheen. In Caihong, melanosomes are flattened into a platelet-like form, which most closely resembles the structures underlying stunning iridescence in living hummingbird. It was a true living rainbow!

So far, there has been no studies attempting to show blue structural colouration in fossil feathers. Flattened between layers of stone, the minute air bubbles are likely to be destroyed beyong recognition. Some of our ‘black’ fossil feathers could actually have been blue or purple in life.

There has been much talk among paleoartists about the limits of structural colour. As iridescences, blues and purples are currently mostly limited to flighted birds, it has been assumed they are impossible for structurally simpler hair- or down-like feathers, limiting many fuzzy non-avian dinosaurs to a mammal-like palette of mostly greys, blacks, and browns (this does not apply to their scaly or skin-covered parts, which could very well have been blue or purple).

While this might be the conservative way to go, nature is seldom so simple. There is a group of mammals who exhibit structural iridescent colour in their fur – unknown to themselves, as they are blind! The golden moles (Chrysochloridae) of sub-Saharan Africa exhibit a shiny fur that has, depending on species, silvery, golden, even greenish or purple iridescence (Snyder et al. 2012). This is apparently caused by the flattened structure of their fur, specialized to endure abrasive sand. The flat, scaly surface of each hair is, apparently by coincidence, just right to refract light. I see no reason why something similar could not have evolved among non-avian dinosaurs – especially since they very likely had full bird-like tetrachromatic colour vision to appreciate it. 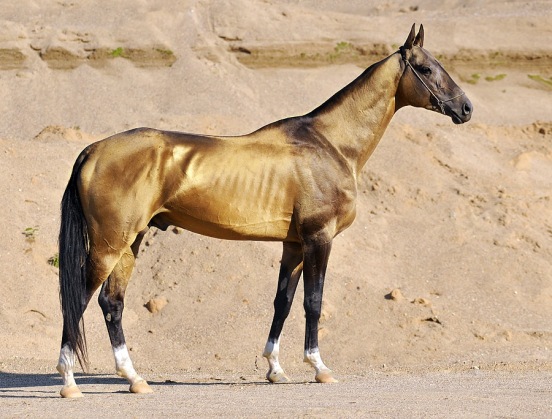 Another interesting case of mammalian (near) iridescence is the Ahal-Teke, a horse breed from Turkmenistan. This horse has a very thin fur with a definite metallic sheen, which is claimed to be because of their unique hair structure. According to (admittedly non-scientific) texts found online, the medulla – or transparent inner part of the hair – is unusually large and acts like an optical fiber, refracting light. Whatever the real explanation, these horses look quite iridescent despite obviously not having complex feathers.

Perhaps we should not be so quick to dismiss the possibility of at least some structural colour in animals with simple, fuzz-like covering, such as tyrannosaurs or pterosaurs – though there probably weren’t any starlings among them.

However fascinating, the colours that can be currently studied in fossils are only a small subset of the rainbow of living birds – and there’s no reason to think non-avian dinosaurs would have been conveniently limited to hues that are both preserved in fossils and can be measured with current technology! 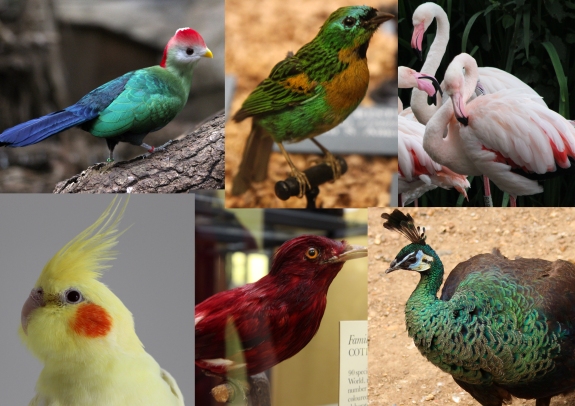 Where does it all come from??

In the next article, we’ll go through other birdy colours – yellows, oranges, reds, purples, and greens, borne from carotenoids, porphyrins and pteridins – and the likelihood of them being present in ancient lineages.

Li et al. 2012: Reconstruction of Microraptor and the Evolution of Iridescent Plumage. Science.

Spearman & Riley 1969: A comparison of the epidermis and pigment cells of the
crocodile with those in two lizard species. Zoological Journal of the Linnaean Society.

10 thoughts on “How birds get their color? (Zoology for paleoartists, part I)”