Dinosaur Provincial Park is a fossil site spanning the time approximately between 76,6-74,8 million years ago, in Alberta, Canada. It’s a famous site with well-known dinosaurs. There are ceratopsians such as Chasmosaurus and Styracosaurus, hadrosaurs such as Corythosaurus and ankylosaurs like Edmontonia. Most famously, the area was haunted by great tyrannosaurs Daspletosaurus and Gorgosaurus.

Less famously, the site also has a fairly good record of fossil plants. At the time, the area was a flat, forested plain with dozens of sediment-laden rivers slowly meandering towards the Western Interior Seaway. The climate was warm temperate, and plenty of ponds and swamps dotted the landscape. This gorgeous and accurate painting is by Julius Csotonyi, from this PLOS One paper, with Creative Commons license.

Let’s now take a closer look at the variety of plants that flourished in the area and fed the dinosaurs.

Finding information on floras of different fossil formations is often a higly frustrating task. Leaves and reproductive structures, fossilized wood and pollen or spore grains tend to be preserved separately. These are classified using no less that three separate taxonomic systems, none of which fully corresponds to the system used with living plants, and few of the plants have been properly decribed. 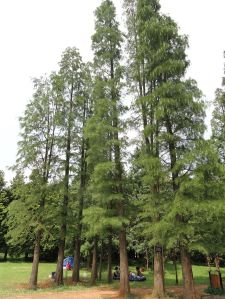 For example, in Dinosaur Provincial Park there are fossilized leaves classified as redwood (Sequoia), though it’s not quite clear if they actually belong to a close relative of modern redwoods or perhaps something related to dawn redwoods (Metasequoia). Fossil plants are often classified into modern genera like this. Sometimes these genera are used with quotation marks to say that they are not necessarily that closely related at all, which is more than a bit confusing. (photo: Metasequoia glyptostroboides in China, Publich Domain from Wikimedia Commons)

What is probably the fossilized wood of the same Dinosaur Provincial Park tree is called Taxodioxylon gypsaceum, and pollen grains probably belonging to the same thing are Sequoiapollenites paleocenicus. What a nightmare.

Let’s try to make some sense of this, however bad it may seem. The pollen record (technically known as the palynological record) is, predictably, the most complete. More than 500 different species of pollen and spores are known from Dinosaur Provincial Park, but these can usually only be classified down to family level. What we do know is that the site had a rich and lush Cretaceous vegetation. There are dozens of ferns of multiple groups, including no less than 20 species of Schizaceae or climbing ferns and 6 species of Gleicheniales, untypical ferns that were featured in the first part of this series. There are plenty of conifers, but only a few cycads, which are dominant in drier areas. There’s also half a dozen relatives of Ephedra, the shrubby gymnosperm that looks a bit like a tussock of grass and sometimes produces red false-fruit. 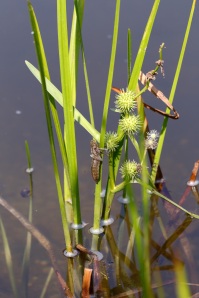 As we are living in the Late Cretaceous, flowering plants were already diverse and abundant. The wet conditions might have still given ferns some edge, but angiosperms sure were there. There were relatives of modern birches, maples, elms and willows, lilies, sundews and proteas. There were no true grasses yet, but two closely related groups are represented: sedges and bur-reeds (photo: lesser bur-reed and a dragonfly exuviae, Tom Potterfield/Flickr).

A more complete list of plant groups known from the palynological record and the species diversity of each can be found in the end of this article.

Fossilized wood, on the other hand, gives us a valuable hint of the structure of Dinosaur Provincial Park forests. All fossil wood chunks known from the site belong to gymnosperms. It seems conifers and ginkgoes still formed the top layer of tall trees, or most of it at least. Flowering plants, though many of them belonging to families that today include big trees, were still pushed to the undergrowth layers as herbs and shrubs, perhaps small trees.

Fortunately, pollen and pieces of wood are not the only things we need to rely on. There is also a record of plant macrofossils, which means leaves, flowers and other reproductive structures, twigs and roots, some quite well preserved. Unfortunately, none of them seem to have been formally described, and the names given to them are no less than five decades old. A few of them have apparently been illustrated in Bell’s 1965 paper that I could not reach despite my efforts (I’d gladly hear if I’m wrong and have just missed some particularly obscure paper, though). Thankfully, Late Cretaceous fossil plants classified into the same species or genera from other parts of North America have been illustrated elsewhere. I used these, and the verbal descriptions in Currie & Koppelhus (2005) to reconstruct some of the plants of Dinosaur Provincial Park.

According to Bell’s species list reproduced in Currie & Koppelhus’s book, there are multiple gymnosperm trees known from leaf and twig fossils, as would be expected, dominant trees as they were. Baiera digitata is a ginkgo tree with deeply divided leaves that lack a clear petiole – the slender stalk separating leaf from branch. Ginkgoites sp., a ginkgo with clear petioles and broader leaf lobes, is also present, though some researchers prefer to sink both into different species of Ginkgo. Apparently, fossil ginkgo nomenclature is a mess. Conifers are represented by Elatocladus albertaensis, a conifer variably described either as a podocarp or a yew tree, and sequoias (Sequoia or Metasequoia). There arehorsetail fronds, and a variety of ferns. 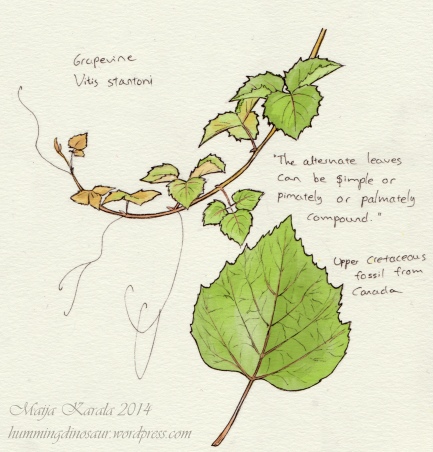 The most common flowering plant macrofossil of the site is a vine called “Vitis” stantoni, either with or without the quotation marks. Vitis is the same genus in which today’s grapevine (Vitis vinifera), the commercially grown grape, is classified, which hints that the species are more than a bit similar, though nobody has apparently looked into this in detail. V. stantoni had variable, alternately placed leaves with serrated edges; they can be simple or compound. The species is widely distributed in many fossil-bearing formations of Late Cretaceous North America. If it actually was a grapevine, it would probably also produce edible fruit, but I have not been able to find a mention if they are preserved in the fossil record or not. 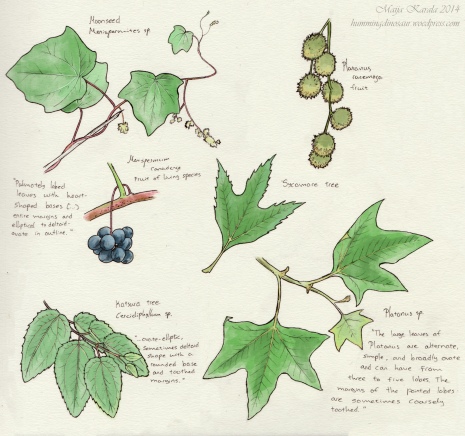 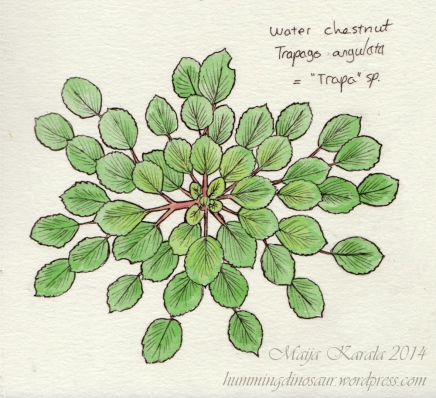 There might have been separate plant communities along riverbanks, with a different set of species further in the forest. As Dinosaur park had slow, meandering rivers and plenty of standing water, aquatic plants were abundant. There’s even a couple of aquatic angiosperms: Pistia corrugatus, a floating member of the arum family (Araceae) and what has been called Trapa sp., a water chestnut, in older papers. A relatively recent paper that actually illustrates and properly describes this plant from the slightly younger St. Mary River formation of Alberta, names it Trapago angulata. While it has a growth habit very much like modern water chestnut, there is little evidence that they truly are close relatives, and it is not known whether Trapago also produced big, edible “nuts”. If it did, they would have been a tasty treat for small herbivorous dinosaurs that could crack the hard, spiny fruit.

Dinosaur Provincial Park had interesting seasons not similar to anything found on Earth today. Climate was warm temperate with the sea nearby, perhaps something like that of modern France or southernmost Britain, with seasonally fluctuating temperatures but rare or no frosts.

While there wasn’t a snowy winter, it certainly doesn’t mean seasons weren’t clear. There seem to have been rainy and dry seasons with the forest flooding annually. That’s what happens in much of modern flat plains regardless of their location – or at least would happen, had not many the rivers been dammed long ago to prevent flooding of arable land. (photo: flooded coniferous forest in Deception Falls Park, WA, USA, pfly/Flickr)

At the time, Alberta was located between 60° and 65° Northern Latitude, which fairly precisely matches with southern half of Finland, where I currently live. While there was no midnight sun in summers, Dinosaur Park summer nights weren’t long and dark either, but a short soft dwilight. In the winter, daylight only lasted for a few hours. It must have been depressingly wet, muddy, chilly and dark, much like a very long Finnish autumn. Many broadleaved trees and perhaps some of the conifers too would have shed their leaves, as photosynthesis probably wasn’t worthwhile during the short, cool days.

Second part: Fruit for the Dinosaurs.

Third part: On Grasses and not Exactly Grasses.

Appendix: A list of microfossil plants of Dinosaur Provincial Park

Here’s a shortened list of what has been found in the palynological record (pollen and spores, that is), from Currie & Koppelhus 2005. All of these should be regaded as the minimum number of species present, as there are many unclassified species, and not all have been yet found and named, obviously. So, brace yourselves. The plants are coming:

University of Texas: Palynology. A short introduction into the science of fossil pollen and spores.

Bell 1965: Upper Cretaceous and Paleocene plants of Western Canada. Geological Survey of Canada, Paper 65-35. (which I could not reach)

University of California Museum of Paleontology: Fossil record of the Ginkgoales.

7 thoughts on “Flora in the Time of Chasmosaurs (botany for paleoartists, part IV)”