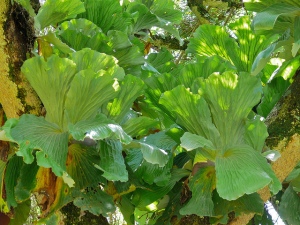 I was recently (and rather persistently) informed that paleoartists might find this sort of articles useful: easily approachable pieces about botany as relevant to paleoart. Most paleoartists are, understandably, primarily interested in prehistoric animals. Unfortunately animals don’t often live on lifeless deserts, so depicting vegetation tends to be essential part of the trade.

Full reconstructions of prehistoric plants or even photographs of plant fossils are often frustratingly hard to find, resulting in quite stereotypical vegetation in much of paleoart. Some ginkgoes, some monkey puzzle trees, cycads that almost always tend to look like Cycas revoluta. And, of course, ferns.

But not all ferns have the nondescript green, bipinnate leaves like the ones we all think of when hearing the word ‘fern’. Paleoartists have a lot more choice than that, even when looking just at the modern diversity. Before the onslaught of hyper-diverse, overly competitive flowering plants and drying climates, ferns were probably vastly more diverse than now. Today’s ferns are pushed into marginal habitats, mostly damp and dark places like forest undergrowth layers (photo: Platycerium elephantotis in Uganda, Bernard Dupont/Flickr).

Still, ferns show a remarkable diversity of leaf shapes. These examples are from my own small collection.

Aquatic ferns, such as Ceratopteris, tend to have very thin, almost see-through leaves. If they happen to be amphibious, the leaves show a different morphology under and above the surface. This particular one grows a lot broader, but smaller leaves underwater. Dimorphic ferns would add a nice touch to aquatic paleoart scenes.

Species living in somewhat drier or sunnier environments, such as Cyrtomium falcatum, often have thick, shiny leaves to minimize water loss. Adiantums, on the other hand, often grow in very damp places, such as on the edges of streams and waterfalls. Their matte leaves efficiently repel water.

Epiphytic ferns have their own special looks. They have the shiny leaves of a plant that has to tolerate occasional

droughts. Their leaves are often less pinnate than those of forest floor ferns. They have creeping, hairy rhizomes that take a firm grip of the host tree, sometimes almost looking like a strangler fig. On the right, a hare’s foot fern (Dawallia sp.) grows on a Wrightia tree.

Though no modern creeping fern attains anything near the size of a strangler fig, it wouldn’t be at all impossible if some prehistoric species did. A huge, hairy fern hugging a ginkgo tree to death. Why not?

The world before flowers was not all greens and browns, either. The young leaves of many plants, especially those growing on low latitutes, are more or less reddish, sometimes quite showy. On the left side is a Pteris growing under bright artificial light, on the right an unidentified fern in Sinharaja rainforest, Sri Lanka.

Red pigments are probably there to protect the young leaf from too much radiation, much like our own skin pigments. There’s also a downside to this: animals with a good enough colour vision can use them as a clue to find the tasty, soft young leaves. This is probably what fern-eating dinosaurs did too, at least the small browsing ones that could selectively pick the best parts. It has even been suggested that being able to find young leaves was the original selective pressure behind the trichromatic vision of Old World monkeys, including us of course.

Variegated plants are often considered merely a horticultural oddity, a consequence of gardeners preferring mutant individuals. Many wild plants, however, also have white, silvery, red or purple bloches or veins. Not even ferns are immune.

Variegation or whole non-green leaves are often associated with plants growing in bright light. It seems to offer protection from the sun, much like the red coloration of young leaves. Red or purple is caused by pigments such as anthocyanins that absorb UV radiation. Whitish and silvery are structural colours, caused by either tiny trichomes on the leaf or microscopic layers inside it. They reflect the sun’s rays, perhaps protecting the plant from overheating in addition to UV damage. Many variegated plants become more colourful when grown in bright light. On the right, the newest leaves of my Pteris ensiformis growing in very bright conditions are more silvery-white than green.

There could be other uses for colours as well. They could be warning signals to animals. There is some evidence that both bright autumn colours of temperate zone trees and variegated leaves of tropical plants are associated with less insect damage. Coloration could be a fitness signal like the high jumps of a gazelle in danger, or an aposematic signal like that of a wasp. You don’t have to have a brain to be able to communicate.

A whole radiation of very unfernlike aquatic ferns also exists – the Salviniales. Their four main lineages are pictured above. They are a fairly old lineage, with members classified into modern genera dating from the Cretaceous, which makes them a fairly safe bet for at least late Mesozoic scenes. There’s also a fossil species, Hydropteris pinnata, from the Late Cretaceous of Canada that looks much like a cross between Pilularia and a moonwort.

The ferns seen above are all members of Polypodiales, the most recent radiation of ferns. They are by no means living fossils, but seem to have arosen only about 100 million or so years ago. For a paleoartist reconstructing scenes older than the Cretaceous, they act mostly as ecological help. Convergent evolution within plants is rampant, and older ferns growing in similar habitats may have looked very similar to modern species.

However, there are still ancient fern lineages alive, and not all of them actually look like ferns either. They are limited in terms of diversity, seemingly remnants that just haven’t yet gotten around to go extinct yet.

The Marattiales is a truly ancient group of tree ferns, though depending on the classification, they might be more closely related to horsetails than actual ferns. The well-known Carboniferous tree fern Psaronius is actually classified into this group, as well as numerous other genera through the Paleozoic and Mesozoic eras.

The Gleicheniales (examples above) appear on the fossil record in the Triassic and were common throughout the Mesozoic. They contain some true oddities, at least compared to our typical view on ferns. Leaves very much like these are known from the fossil record, for example from multiple locations around the Jurassic of Europe. 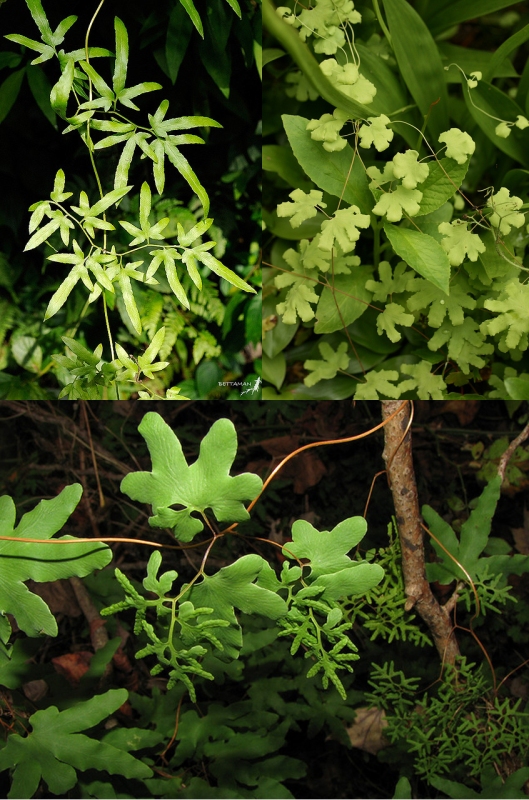 Just to top it all of, these are climbing ferns of the genus Lygodium. They differ from all other ferns in that their fronds grow endlessly and twine around other plants like a true vine, the main difference being that a whole Lygodium vine is technically a single leaf. Fern vines and lianas aren’t far fetched in Mesozoic paleoart either. Schizaeales, the group containing Lygodium, was most widespread on the northern hemisphere in the Mesozoic, though today it’s mostly found from the southern continents.

Lygodium forms huge masses growing on top of other plants, much like more familiar creeping plants do. In Florida, L. microphyllum and L. japonicum are invasive plants. Pictured is L. microphyllum growing on cypresses in modern Florida, a scene probably not too much different from those a time traveler might see in the Mesozoic (photo: Homer Edward Price/Flickr).

While this still was a rather shallow dive to the diversity of ferns (though it’s a lot longer than anything I intended to write!), I hope it did something to help mapping the possibilities of ferns in paleoart. If you were inspired by this article, feel free leave a comment, and perhaps a link to your work.

Lev-Yadun & Gould 2007: What do red and yellow autumn leaves signal? The Botanical Review.

What are ferns? A brief and approachable look at modern fern biology.

University of California Museum of Paleontology: Pteridopsida. A brief overview of fern paleontology, including the temporal ranges of different groups.

Wikipedia: Leptosporangiate fern. Includes a phyogeny and a wealth of information about fern diversity.